Customers at a local bank were surprised to see an unusual visitor as they did their Saturday morning errands in Sale town centre. 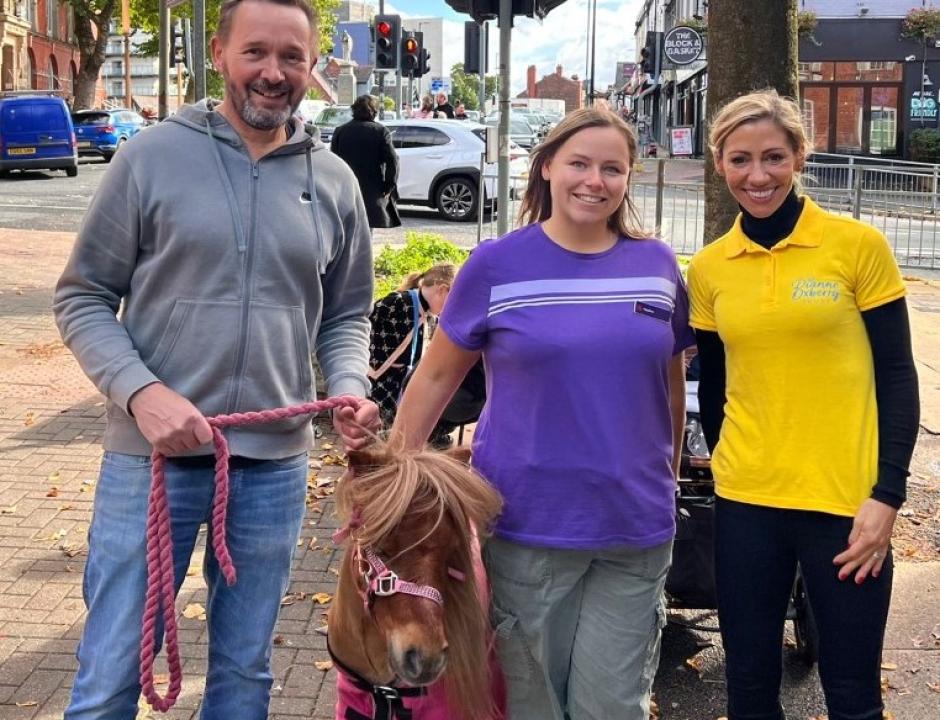 A minature pony named Peanut, which was welcoming people to the NatWest bank branch in Stanley Square, Sale, was part of a special fundraising event to raise much-needed funds for our charity.

Kind-hearted staff at the branch had chosen the charity as one of three to support during the year, and organised a visit from Peanut from Merrylegs Ponies, alongside a fundraising raffle and bake sale. The day of activities raised £161 for the Dianne Oxberry Trust.

Heather Mills, senior personal banker from NatWest, who organised the charity fundraising alongside colleague Will Jenson and branch manager Danielle Froome, said: “It was great that Julie from Merrylegs Ponies agreed to come along and bring Peanut to meet our customers.  It really got people talking, and it was great to be supporting a local charity too.

“Everyone saw him in the street and came running over, and we were able to tell them what we were fundraising for and why. Lots of customers knew Dianne Oxberry, as did lots of our staff too.  She was local to us, and we thought it was a perfect choice to support such a great cause set up in her name.”

The branch is also helping us with our Spread the Word campaign, encouraging people to learn more about the symptoms of ovarian cancer to aid early diagnosis by giving out leaflets and information.

Dianne was diagnosed with the disease on New Year’s Eve 2018 and died just 10 days later, so her friends and family launched the special appeal to help raise awareness of the symptoms and hopefully improve outcomes via earlier detection.

Heather added: “The Spread the Word leaflets are great as they are helping us reach people from a variety of age groups and raise awareness of the symptoms of ovarian cancer.  Reaching out to just one extra person who might be able to get early diagnosis is so important and could make a difference or save their life.

“Dianne’s husband Ian and her friend Jo came along on the fundraising day and it was so lovely to meet them – they seemed to enjoy meeting Peanut too, and were really touched by the fundraising that was going on.”

The branch staff have other fundraising activity planned in the coming weeks and months to raise even more funds for the charity, including a fancy dress day.

Jo Rosenberg, a trustee of the Dianne Oxberry Trust who was a good friend of Dianne, said: “It was so lovely to see everyone coming together at the NatWest bank raising funds to help us Spread the Word.

“Having Peanut there was great.  Dianne used to love ponies, so this was a really fitting way for the team to raise funds.

“The money raised from this, and other activities, helps us to continue raising awareness of the symptoms of ovarian cancer with people across the North West.  We receive feedback from individuals who have seen the campaign on social media, or out in the community in places like NatWest and have been to see their GP about symptoms as a result.

“We found out the hard way that all too often diagnosis comes too late when it comes to ovarian cancer, so being body aware and knowing when to see a doctor is vital.

“Huge thanks to the whole team at NatWest in Sale, and their generous customers too.  We’re really grateful for all their support and the difference they’re helping us to make.”

The Spread the Word campaign was launched earlier this, and includes an acronym to help people remember some of the main symptoms of ovarian cancer to look out for:

Dull ache or pain in the pelvis or tummy

If you are interested in sharing some of the charity’s leaflets or information about ovarian cancer and its symptoms, or supporting our charity to Spread the Word in your business, please contact info@dianneoxberrytrust.org